‘Made in Qatar’ coach unveiled by Mowasalat

DOHA: Mowasalat launched its first bus that was fully assembled in Qatar by the company’s technicians.
The technical team at the Karwa Services Unit (KSU) assembled the 41-seat “Made in Qatar” coach from a complete set of imported spare parts.

This is the first of a series of prototypes being developed by Mowasalat as part of its plans to enter bus assembling and manufacturing industry in a big way.

The company is working on a project to establish a large-scale facility in Oman to assemble buses for the Arab and GCC markets. 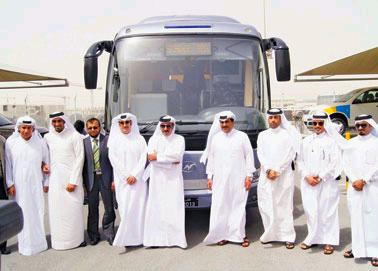 “This marks a major achievement for us in terms of technology transfer. We will develop more bus models locally as we prepare to establish our assembling and manufacturing unit in Oman,” Jassim Saif Al Sulaiti, Mowasalat’s Chairman and Managing Director, said in a press conference yesterday.
“We will develop two or three new models every year but we have no plans to assemble buses locally on a large scale,” he added.

He said that the proposed facility in Oman once ready will assemble 2,000 buses every year to meet the requirements of the local and GCC markets.

“We are in the final phase of preparations to establish the facility. We have also plans to enter bus manufacturing industry in a later phase,” said Al Sulaiti.

He said the locally assembled buses are more cost-effective compared to the imported ones.
The first “Made in Qatar” bus has joined the fleet of Mowasalat buses that are available for private hire.
Assembled from Complete Knockdown (CKD) units, the bus offers the same comfort, safety features, stylish looks and versatile body of the imported Karwa buses.

The bus is designed to meet various requirements such as transportation of schoolchildren and company staff, feeder services and for tour and travel.

Posted by Jamal Panhwar at 6:48 AM